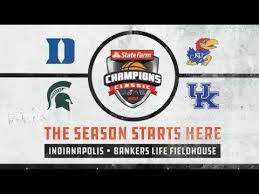 EDITOR’S NOTE:         Since we closed out last season, I have had a rough time health-wise, which saw me admitted to Hospital a number of times, the last being recently. Unfortunately, this last one interfered with my being able to effectively put together our usual Player’s Profiles. My apologies go to both the players and our readers. I pray you will all understand and ask your indulgence.

We then begin with the beginning to the new season … and what a beginning it was !!!

In any other season, a Duke-Kentucky match-up would mean high theater, and down-to-the-last-minute play to decide the outcome. On Fan-Sided, one of their writers, under a Duke Subject Line, offered, in a ridiculously one-sided article, weaved his way thru why Kentucky would prevail.  Au Contraire, my friend.  Maybe next time you’ll use a proper Kentucky Subject Line to fabricate your conservancies.

I only mention this here because the best offerings I could find, in an effort to see what “others” thought of this year’s match-up was another article on Fan-Sided, offering “3 Takeaways from Duke’s win …”  claiming that Duke’s “… biggest issue …” was their lack of depth.   What game must this writer have been watching ???   Certainly not the one the rest of us saw.  So, to that end, here is why this squad impressed me in a BIG way …

While one could get silly and point out that had Coach K left all 3 Frosh “Bigs” in for the entire game, they would have jointly beaten all those players Kentucky fans gushed over … well, up until Half-Time, anyway.

Bolden, the oft-injured Center, had an outing that impressed me as much as he did when I first saw him, preceding his first injury. He had 4 Rebounds, a Block and an Assist. He had one of those nights that simply didn’t reflect how well he played in his 26 minutes. I’m so very glad to see that !!!

Tre Jones did exactly what you want your Point Guard to do – Run the team. To that end, while Tre acceded to the 83 points of the Duke’s 3 Frosh “Bigs”, his biggest contribution was 7 Assists, a Steal, and his steady, dependable control of his team.

The remaining 3 guys logged in 11 minutes combined. This best surprise of the night was not the theatrics of Duke’s 3 Frosh “Bigs,” it was the highly influential night Jack White had.

The Junior Co-Captain (with roommate Javin DeLaurier) logged a team-leading 11 Rebounds, plus 3 Assists and 2 Steals in 30 minutes on the floor. Javin only played 12 minutes due to 4 quick fouls, but in that time, he logged 3 Rebounds, 2 Steals, and Block. So much for Duke’s supposed lack of depth !!!

“Flyin’ Zion” Willamson proved he is everything we were told he would be. I believe that the Score Keepers ought to have a separate column for Field Goals by Dunk to more accurately reflect a player’s game. Zion is 6’7″ and 285 lbs with incredible leaps that make one recall players of yesteryear like MJ, Dr. J, Clyde the Glide, or Dominique. Zion is said to have broken the Duke all-time vertical leap record of 40″ by as much as 5″ … Compare that to Wilt “The Stilt” Chamberlain’s 48″ at 7’1″ and 275 lbs. and you will understand my point.

I do not intend to minimize the performances of the other players of the Duke 3 Frosh “BIGS” soooooooooo ….

Duke is in an enviable place at this, the earliest point in the new season, amongst the rest of Division I schools. Coach K has assembled a fine group of young men who seem to genuinely enjoy each other and want to see the other guy excel. There is no contemptible personality exhibiting the “Hooray for me, and the hell with everyone else” and I couldn’t be happier.

If you have not yet seen the documentary “Earn Everything,” I heartily recommend it, even if you have to use up your 7 day free offer to ESPN+ via any of the streaming portals. I already had ESPN+ because I’m also a Seria A Italian League fan and after to watch it all, you will understand why I am so high on it. Suffice to say I think that the last team that might have done something like this, attitudinally, might have been that wonderful 2010 team.  Interestingly, that team is pretty well represented on the Bench right next to Coach K in suits.

Thanks for the read and for coming back to join us for yet another season.       Please know that you can always find us here, on Facebook, and on Twitter at:

e always welcome comments, conversations, and debate as long as it is polite and within proper decorum.

A PS to Bill Wheeler,

Thank you for your contributions and patience during my time of need for understanding. I hope I have included much of what you submitted in this article. If not, I’m sure your points will be woven into future pieces.