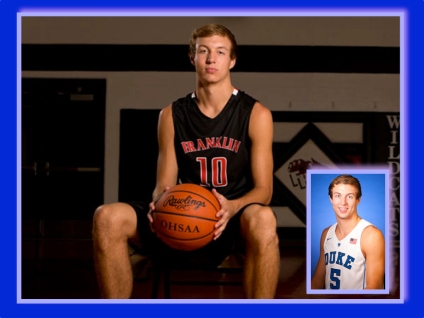 As Coach K’s Freshmen-laden roster prepares for their first exhibition game on Friday night against Florida Southern, we’d like to introduce you to Duke’s Frosh for this season.

We’ll do it by the numbers … jersey numbers, that is.

So here is Ro’s next Profile … #5, Luke Kennard

In basketball it helps to be as versatile as can be, but if you can master one skill very well it will take you a lot further, especially if it is shooting.   Luke Kennard can shoot the ball very well, but he is also a versatile player. At 6’5” he has great size for a Shooting Guard.  He is more of a combo Guard accustomed to having the ball in his hands.

Where does Duke need him ???

Kennard’s role was all set until Grayson Allen blew up in the NCAA Tournament.  Now it isn’t so certain.  As a shooter there will always be a place for him in Duke’s offense, but Matt Jones and Allen are likely ahead of him in the depth chart, at the moment.

One position where Duke can use him in is as a ball handler/backup Point Guard.  Even though he is a great shooter he can also handle the ball and was accustomed to being the main facilitator on offense for his high school team.

Best Case Scenario:   The obvious choice is Jon Scheyer, who came to Duke as a Shooting Guard and, out of necessity, became the lead Guard during his Senior year, when he led to Duke the 2010 National Championship.

Luke Kennard is a little more athletic and will throw it down if given just enough space.

JJ Reddick is not a bad comparison either, in terms of shooting, but Kennard is much further ahead as a Freshman in terms of scoring off the dribble.

At the moment Kennard may be the odd man out, but given the opportunity he will flourish.  If he isn’t given a starring role from Day One, he will make his mark with the Duke faithful by season’s end.

Watch for our next Frosh introduction right behind this guy.

We welcome your comments, either here or on our Twitter site: